– Most ideal time to visit Da Nang is from March to mid-September. This is the sunny season in Vietnam, blue clear sky, perfect for the beach. Hottest months are May-August (30-38°C).

– From January to March: can be quite chilly (lowest temperature: ~16°C), therefore not a good time for the beach if you’re from a tropical country. Sky may be unclear/cloudy/gray.

– Avoid late September, October and November as it rains a lot. 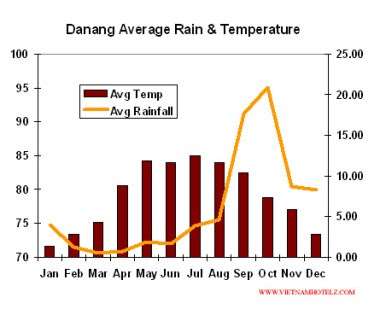 – Son Tra Peninsula: it takes about 30 mins from the city center to go up the mountain by motorbike. From there you can see the magnificent arc of Danang beach and city. There are several decent seafood restaurants there with affordable price. These restaurants are located next to the sea and the sea water there are crystal-like, superbly beautiful.

– Ba Na is a complex of a wide range of mountain resorts. Ba Na has cool weather, surrounded by very nice floral and fauna, and has a fantastic view of the city. From the foot of the mountain you can take the cable car straight to the top with the cost of 3-400,000VND for a two-way adult ticket (there’s discount for Da Nang citizens- make sure to bring your ID). This is the highest and longest cable car route in the world, with incredible view of the mountain and waterfall underneath. The cable car station is 30km away from the city centre.

– My Khe beach: this is the most visited beach by the local people. It is located in the area near the end of Pham Van Dong street. You can use the public shower to cleanse your body after swimming for free. The only thing they would charge is the fee for keeping your motorbike if you ride one (3000VND) or the deposit for keeping your belongings.

– Marble Moutains (Ngũ Hành Sơn – “Five-element mountain”): Located 15 kms from the city centre on the way to Hoi An, the Mable Mountains is a cluster of five marble and limestone hills. To get to the top of the biggest mountain, you can either climb 130 stairs or take the elevator. From there you can visit the pagodas and beautiful natural-made caves among which Hades Cave is considered the largest and most mysterious; in this cave there are two paths, one to Heaven and one to Hell. From the “Heaven” peak there is breathtaking view of the other 4 mountains and the surrounding area.

The area is also famous for stone sculpture making and stone-cutting crafts.

– Bach Dang street: this is possibly the most beautiful street of Da Nang. Simply take a stroll along the street to have a quick view of all the magnificent bridges, Cham museum, Han market, City Hall, and other interesting places. All the bridges are lit up at night with spectacular lightings. Don’t miss seeing the Han bridge swinging on its axis to allow shipping traffic to pass along the river after midnight, or the new Dragon bridge breathing fire and water on weekends!

– Cham Museum has the largest and the most voluminous collection of Cham art in the world. The Cham People were an indigenous race who inhabited in the coastal regions in mostly central Vietnam way back in 192 BC. After the My Son ancient tower complex was discovered by M.C Paris in 1898, many of its artifacts were collected and displayed at this museum.

– Han Market: you can find anything (clothes, fruits, food, souvenirs…) here at very cheap price, as long as you can bargain (English is also possible).


Where to stay– To have easy access to good local food, don’t stray too far from the area in the map below. The red zone is considered (by me) ‘street food heaven’ of Da Nang. 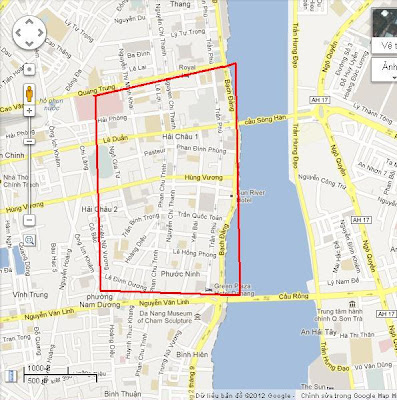 – To enjoy the beach, you can stay at dozens of accommodations ranging from cheap hostels to five-star resorts along the beach. The area from Han river to the beach (right side of Han river) is often referred to, by expats, as “the Eastside”. In short, on the Westside: amazing street food, on the Eastside: beautiful beach.